Rambling through central Illinois, pondering squirrel genetics.
• • •
Kudos to the graduates. Years from now, you will have stories to tell about the weirdness of your COVID- impacted graduation ceremonies. Of course, by then the IDPH will probably require people to wear rubber suits and astronaut helmets while in public, so maybe this year will seem “old school” by then. … Usually by now, mushroom season is over. Not this year. Not when Keith Challacombe is knocking at the door on a rainy Saturday with a bucket of morels and a story. Seems he found one ’shroom near Elmore last weekend that had grown through a hole in a plastic bag. The morel was normal under the bag, thin where it grew through the bag, and normal above the bag. Never seen that before. But Keith deserves some nice morels after losing his house to a fire this year. … Then there was the picture (at right) from John Herman of Elmwood, proving there are monsters still to be found, though temperatures climbing into the 80s will bring that to an end.
• • •
While efforts to spot a capybara have so far been fruitless, another critter caught my eye: the black squirrels of Yates City. Once upon a time, I only saw black squirrels in Farmington. Legend has it somebody brought babies back from Colorado, or maybe Wisconsin. However they got here, at some point, part of the black squirrel clan migrated to Yates City. And the migration must still be underway, because the other day a black squirrel scampered through our Elmwood yard. … Parting shot: This reminds me of the year when several fox squirrels in town were born with white tails. Eventually, they grew out of that color phase, but for a few months, it was fun to watch the two-tone rascals frolic. At that same time, we had roofers on the house who really wanted a two-tone squirrel for their taxidermy displays. While that never happened, we once again face roof repairs. We may face similar requests for “stuffed squirrel.” Nope. Black squirrels are safe in my yard.
Contact Jeff Lampe at (309) 231-6040 or jeff@wklypost.com 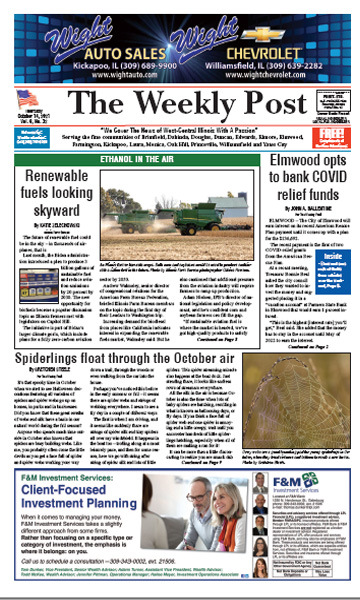