By JOHN A. BALLENTINE
For The Prairie News
TOULON – Toulon’s sanitary sewer lift station is going to cost the city $188,630 more than what was estimated to cost last fall. City Engineer Ed Andrews of the Farnsworth Group told the Toulon City Council on Monday that bids for the project’s construction were opened on June 3 and Stark Excavating, Inc. was the low bidder.
Stark’s bid of $688,630 is to construct the lift station at Whitaker Street and West Prairie Street, although Farnsworth’s handout states “The lift station’s force main was…at Turner Avenue and Henderson Street” for the connection to a manhole.
A handout from Farnsworth Group said lift station components “reflect approximately a 20 percent increase based on material price increases.” Andrews said that the cost of PVC pipe materials is approximately 60 percent more than last fall. Knowing this, the city council approved Stark’s bid.
Asked for a timeline, Farnsworth said that nine months from July 1 would put the completed construction date around February or March – though April 1 would be nine months from July.
The health department, which is pressing the city for the project’s completion, granted an extension to the city that expires in November. According to the timeline, an additional extension will be required.
Mayor Larry Hollis said financing this project will be feasible.
“Well, I don’t think that is going to be an issue,” Hollis said. “The good news is that the money you are getting from the government can be applied to this type of project.”
Hollis said later that financing of this project will be through the State Bank of Toulon; and that the government money will come from the federal government’s Stimulus Package that will be applied to the cost of the lift-station project.
In other action, the Uptown Sidewalk project awaits approval from the Illinois Department of Transportation, because Toulon’s Main Street is Illinois Route 17.
The Motor Fuel Tax sealcoating and patching project of city streets received one bid, which the council rejected. The project is to be rebid.
Sale of city land to Stark County is on hold until property lines are surveyed to establish ownership of land at the northeast corner of Routes 17 and 91 in east Toulon. The county would like to obtain property north of its own for the construction of a new county highway building.
The council approved the switch from Mediacom and Frontier Communications to Mid-Century for internet and telephone service provided to the city.
Also approved was the city’s appropriations and budget for 2021-22 totaling $1,222,650.
The council discussed vehicle ordinances and decided current ordinances require updates concerning towing of abandoned vehicles in Toulon. The council would like to see a hearing or court order added.
The city is waiting for the Stark County Historical Society’s quotes concerning the cost of concrete for a new sidewalk project at the Society’s newly constructed building on West Jefferson Street. Hollis reiterated that he would like to have the city pay for the entire project, including labor and concrete.
New city attorney Kate Carter said she is waiting for former attorney Michael Evans to give her the ordinances, which are being updated and compiled. 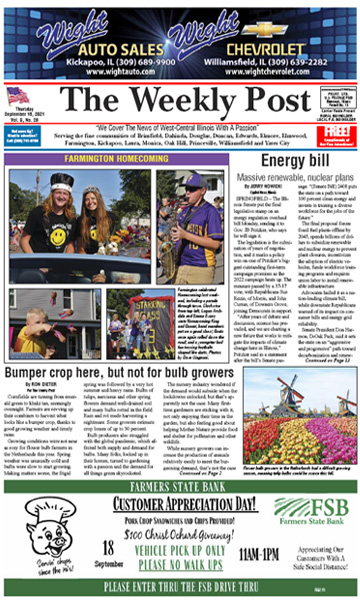